I've had a good run, in the years from 2008-2016 but all good things must come to an end unfortunately. Thank you to all who have visited, downloaded and made my models.

I've changed my username on a variety of accounts and can now be found as Avrin-ART
on both DeviantART and Tumblr where I am still around to offer advice and answer any questions.
Posted by Xenon at 18:28 No comments:

Email ThisBlogThis!Share to TwitterShare to FacebookShare to Pinterest
Labels: Information

Happy New Year! Today I'm happy to finally release my Sheik model from Hyrule Warriors on the Wii U!

As my papercraft and gaming interests change, it's getting a bit harder for me to find Nintendo related projects to work on. But the characters of Hyrule Warriors generally look amazing and present some very interesting opportunities for model making! 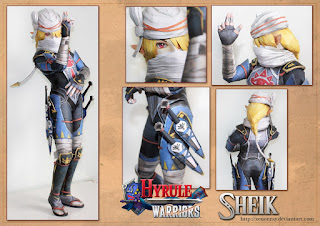 This model stands 45cm tall and consists of 280 pieces! The main shape of the body is not too complicated believe it or not, but there are many extra details that can be time consuming. Not to mention you can spend hours building the perfect face, only to have most of it covered in the end!

If you have ever built any of my other larger 40-50cm crafts then this is fairly similar. Areas of difficulty include the hands, hair braids and face.

The Majora's Mask remake on the 3DS is brilliant. And with the models now available to work with, I set to making another 3DS based papercraft. 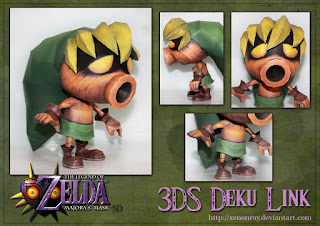 Upon entering Termina, Link is transformed into a deku scrub by the Skull Kid. In this form, he can hop across water, fly with deku flowers and shoot bubbles out of his snout.

This little fellow is better edited and thought out than my experimental 3DS Sheik model. For a start I have abandoned the idea that they need to be similar in size to my N64 models, so he is larger than usual, allowing more detail to be preserved. Ok larger than usual means only 17cm but Deku Link is small compared to most other characters.

Also I've decided to treat this a 'complex' craft and have built mine in the smooth method, where I've ignored most fold lines.

It is a mix of small and large parts. The hair is a bit awkward but most things should not be a problem for experienced builders.

Earlier this year an archive of models ripped from Ocarina of Time 3D on the 3DS was released on the internet. This of course caught my attention for papercraft purposes so today I am releasing my first 3DS model, Sheik. 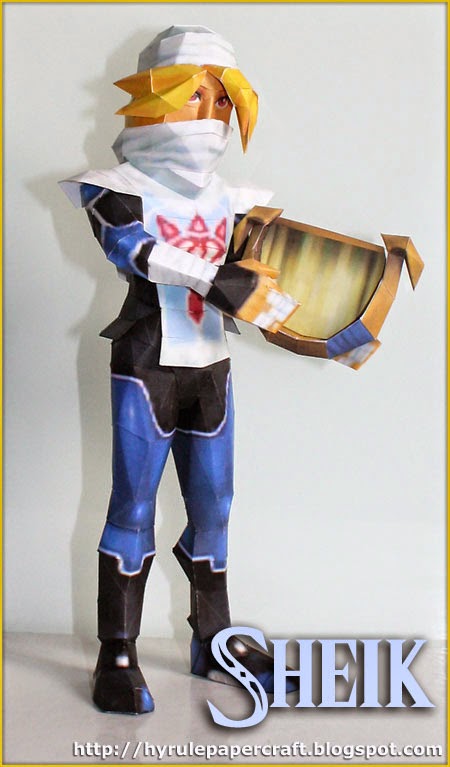 As an adult in Ocarina of Time, Link receives help from this mysterious member of the Sheikah tribe. Sheik provides information about the state of the world under Ganondorf's rule and teaches Link the numerous warp songs to travel quickly across the land.

Although described as a young man in game, it is later revealed that Sheik is actually Princess Zelda in disguise. This alter-ego of hers has since been used in numerous spin-off titles from Smash Bros. to Hyrule Warriors.

Being a 3DS model it is more complex than the N64 equivalent. So she is not to scale with my other series of models, and stands at 24.5cm tall. Even with the increased level of detail, they modeled the 3DS versions very closely to the originals, so the style is still very angular and suited to be built with the usual score and fold method.

Since it is my first try at these new style of models, this one is slightly experimental. It shouldn't be too hard but there are some delicate bits to build (hair, face) and slotting the 2D strings into the harp is a bit awkward.

It is now possible to get models from this game.

Email ThisBlogThis!Share to TwitterShare to FacebookShare to Pinterest
Labels: Information, Ocarina of Time

In early 2010 I was looking around for obscure content from Majora's Mask and ended up making the now infamous Elegy of Emptiness of Link. The prospect of making a set of all four statues came up and shortly after I made the cute but sad looking Elegy Deku. Later in summer I did the Elegy Zora too (though that one was pretty hard) and had only one model remaining: the Elegy Goron. But interest faded and I never began work on it...until now. 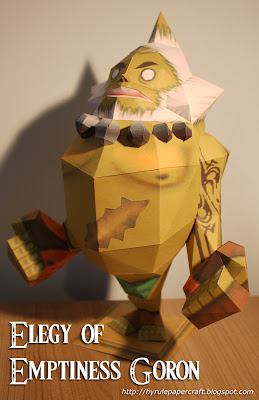 In Majora's Mask by playing the song, Elegy of Emptiness inside Stone Tower, Link can 'shed a shell' of himself to create a statue of his current form. Described as a souless image, these are used to solve a variety of puzzles later on. Wearing the Goron mask, the statue produced is the Goron Hero Darmani, the soul from which the mask was derived.

This statue makes a large boxy model at ~28cm tall. The feet are small and must be built neatly and weighed down strongly, but from the waist up it becomes much easier with mostly large parts. You must cut out the shape of the scar from the large brown piece (a reference is provided). Take care with closing the head and some important shapes around the face and hands.

Goodness me, my first N64 Zelda model for almost a year and a half! I had this template lying around since spring 2012 but with focus on my other more complex projects I just couldn't be bothered to start it. Finally however here's Anju' Grandmother, the forgetful storyteller from Majora's Mask. 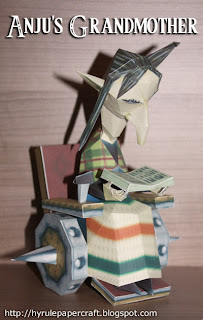 Anju's Grandmother is confined to her wheelchair and spends her days in the back room of the Stock Pot Inn in Clock Town. She enjoys telling stories from Termina's history, though they are quite long and end up putting people to sleep! At the very least this can help Link pass large amounts of time in the three day system but if he wants to stay awake he'll need the All-Night Mask. She seems to be losing her memory as she mistakes Link and Anju for Tortus, her deceased son and appears oblivious to the events in Termina. Although reading her diary reveals this senility is likely just a ruse to avoid eating Anju's terrible cooking and be left alone!

As for the model, the chair and most of the body is simple and boxy. Only the small hands and odd shape of the head could be awkward.

Height is approximately 17cm, including the upper hair strand.

Compared to what I've been building recently, this was very easy for me (I almost gave it a low difficulty score before checking what I've given models in the past!). Yet I was pretty damn rusty at building with the score and fold technique so it's not the neatest model I've ever built!
Posted by Xenon at 13:29 1 comment:

Released as a project for Nintendo Papercraft, I thought I could also put it on my own site since it's very relevant to Hyrule Papercraft too! This model has been a long time in the making, well in the papercrafting world that means a couple of months at least! Now 6 years on since Twilight Princess, I don't think this is as big a spoiler anymore! 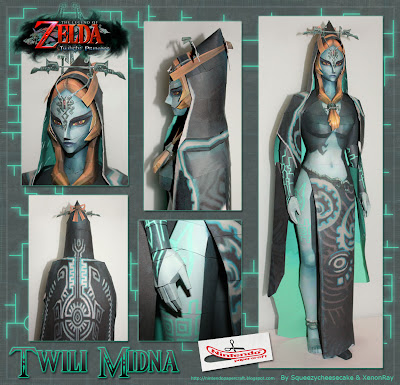 Midna is Link's main companion during Twilight Princess and for most of the game is seen in her imp form due to the curse placed on her by the power hungry Zant. However once Ganondorf has been defeated the curse is finally broken and she is restored to her true Twili form. You can't blame Link for being surprised when the bossy little imp that's been skulking in his shadow turns out to be the towering ruler of the Twili! And a little easier on the eyes than Zant and his cronies!

This model is the result of a collaboration between me and Squeezycheesecake for Nintendo Papercraft. Throughout the years I've always dreamed of having this as a papercraft. It's been attempted in the past but to no avail. The original model files are easy to find on the internet- but everything is stuck in a T-pose, and the cloak would cause obvious headaches from day one. Thanks to some rigging by Squeezy we got it into a simple pose and set to work simplifying, editing and cleaning textures. Fast forward a bit and now it's finally complete, standing 48-49cm tall with 16 pages.

There's a lot I could talk about on construction but I'll keep it short since there's a lot of info in the notes and on PDO/PDF #1. This is a complex model, so make sure you have some experience and correct materials for crafting. The instructions are pretty detailed but use of the PDO is highly recommended. Finally, we really recommend colouring the back of the cloak a cyan colour to avoid a massive white surface (likewise, the hood and skirt insides benefit from colouring black). Some ideas on how to do this are written in the notes.

By Squeezycheesecake and Xenon
Posted by Xenon at 12:03 2 comments:

The result of the mini poll was tied, so I ended up going with Saria, who I'd already started building when it was looking like she might win. Don't worry I have PDO files ready for almost all of the characters listed so you can expect to see the others eventually! 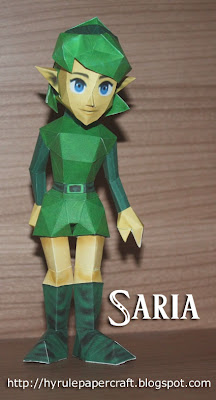 Saria is Link's best childhood friend who enjoys playing the ocarina in the Sacred Forest Meadow. Unlike most of the Kokiri she has an air of wisdom and maturity about her and indeed she is later revealed to be the Sage of Forest once Phantom Ganon is defeated. She's also known for teaching Link one of the most catchy tunes in the entire Zelda series!

Now this model has a bit of a history. In February 2010 I was working on her but ran into difficulties because of the size. When I upgraded computers I thought I lost the template, but found her again this year. With improved skills I edited the 3D model into a better form for papercrafting, resulting in the craft you see here. Thank goodness I never released the first version as the editing was pretty shoddy compared to this one.

The size is still an issue, even after enlarging her slightly. Saria is actually a very small character in game (a child after all) so in my scale she is tiny compared to everyone else, at only 16cm. However because of the small size and difficulty, admittedly close to my own limits for size versus detail, I decided to create a bigger 22cm version that you can build instead. Though I'll respect you more if you manage the small one! ;p

Regardless of size, the hands, legs and shorts are quite tricky. Also the side hair strands ought to be built in a certain way to prevent difficulty closing the model, so please check the instructions.