It's been a while since I've done a Zelda character model after being tied up with another more complex non-Zelda craft, so here's the ever wise, serious and slightly mysterious Rauru from Ocarina of Time. 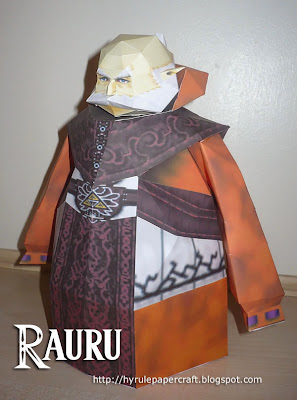 Rauru is the Sage of Light and the first person Link meets after being revealed as the Hero of Time. He explains the events of the last seven years and the effects of Ganondorf's evil reign. Things look bad at first but he starts Link off on his quest to awaken and unite the five other Sages to gain their power to save Hyrule!
This model is easy to medium. The body and arms are large and blocky and should be simple so long as you assemble them in a suitable order. He has no visible legs or hands, which gets rid of a few tricky parts! The head has more detail, and although the parts are moderately big, there's some important folds around the face, moustache and chin which must be done cleanly. Eventually the head glues via surface contact into the inner hood, and the arms attach in the same way underneath the shoulder arches.

Scaled to my other characters as usual and stands ~25cm tall. After some infuriating balance problems with my recent non-Zelda crafts it's a great relief to build something that is completely stable!

Hmm yes you're right. I don't know how that one happened, but thanks for telling me.